One Day in Hue

Hue City is the ancient cap­i­tal of Viet­nam with the high­est con­cen­tra­tion of his­toric struc­tures in the coun­try. But what do you do if you only have one day in Hue? Here is my overview for the time-con­scious trav­el­er with just one day in Hue. 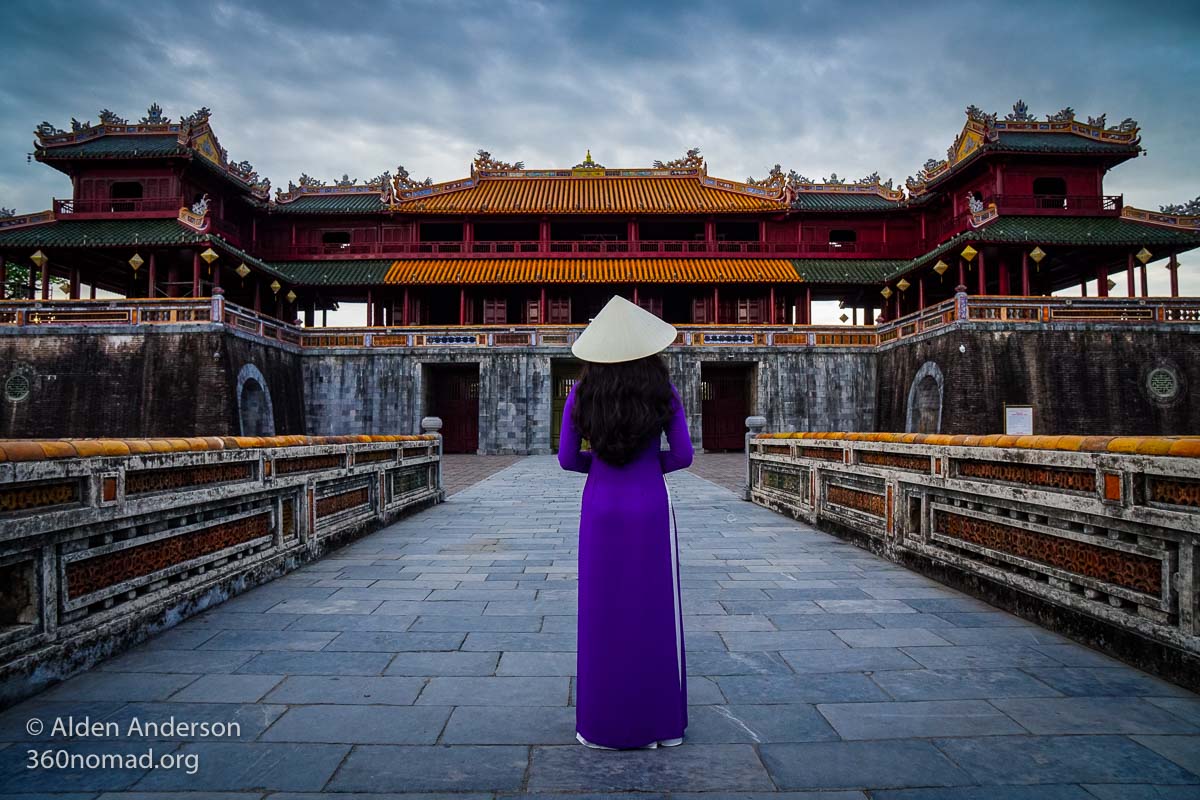 No mat­ter what you’re inter­est­ed in, the Impe­r­i­al City is a must. It is the for­mer cap­i­tal of Viet­nam and the seat of the Nguyen Dynasty for almost 150 years, up until 1945 when the cap­i­tal was moved to Hanoi.

The Citadel takes at least 2 hours and up to 4 or 5 hours if you real­ly want to see and read every­thing, as well as take pic­tures. Get­ting an ear­ly start is rec­om­mend­ed to beat the mid­day heat and crowds.

Check out the com­plete arti­cle on the Hue Citadel here:

Thich Quang Duc, a Bud­dhist monk from the Thien Mu Pago­da made inter­na­tion­al head­lines in 1963 when he burned him­self to death at an inter­sec­tion in Saigon, protest­ing the oppres­sion of Bud­dhists by the South Viet­namese gov­ern­ment. The car that drove him to the inter­sec­tion can be seen on dis­play in a build­ing behind the Thien Mu Pagoda.

It is a pop­u­lar place to vis­it with many tourists bus­es. Get there ear­ly to avoid the crowds. It’s about a ten-minute dri­ve from the Citadel so if you’re an ear­ly bird, go and see it before you see the Citadel.

Built in 1808, dur­ing the reign of Gia Long, the first Nguyen Empor­er, the Tem­ple of Lit­er­a­ture in Hue was built as a tem­ple ded­i­cat­ed to the schol­ars of Con­fu­cian­ism. In lat­er years, nation­al exam­i­na­tions were held here and the names of suc­cess­ful can­di­dates are engraved on stone slabs.

It is just a few min­utes down the road from the Thien Mu Pago­da but is vis­it­ed by only a few. It’s free to enter and despite the destruc­tion over the ages, it’s well worth a short stop. You will prob­a­bly have the place to yourself.

Now it is time for lunch! There’s a great local spot between the Citadel and Thien Mu Pago­da called Quan An Huyen Anh.
It’s a pop­u­lar spot amongst locals and one of my favorite places to eat in Hue! The address shows up incor­rect­ly when you enter it in Google Maps so use the name. Though, if you’re look­ing at the actu­al address­es on the street it will be at 52 Kim Long, down a small alley. 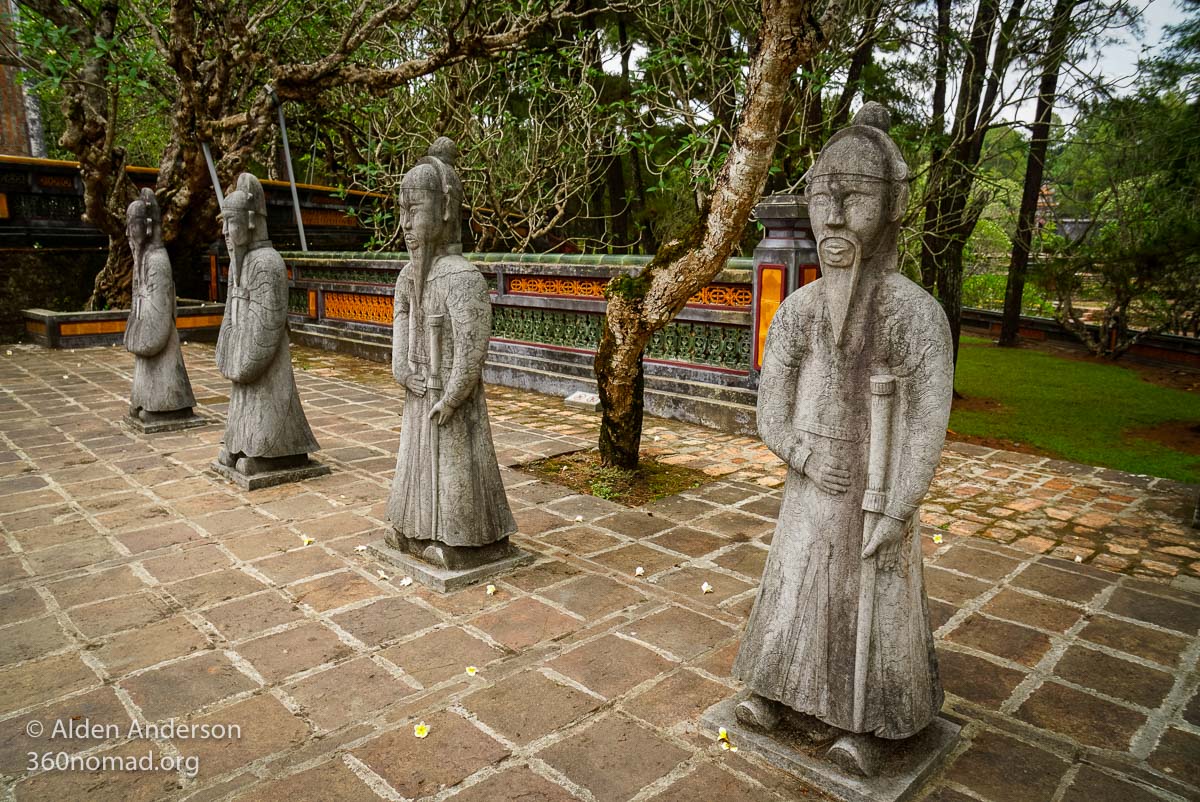 The Nguyen Dynasty Emper­ors were, in most cas­es, buried in Hue, near the Per­fume Riv­er. The tombs are more like small citadels with beau­ti­ful gates, archi­tec­ture, and sprawl­ing grounds; not what you might think of as a tomb.

If you have just one day in Hue then you will like­ly have time for just one tomb. There are three “main” tombs (the larg­er more elab­o­rate tombs): 1. Tu Duc, 2. Khai Dinh, 3. Minh Mang, as well as a hand full of small­er tombs.

Select­ing one tomb depends on what your inter­ests are. My per­son­al favorite was Tu Duc with its small island, pavil­ions, old crum­bling walls (just one sec­tion) in a beau­ti­ful for­est set­ting (though a few of the struc­tures are being restored).

The most elab­o­rate impe­r­i­al tomb, with a mix of Chi­nese and Euro­pean archi­tec­ture, as well as the only tomb where you can view the actu­al remains, is the tomb of emper­or Khai Dinh.

Look at the full arti­cle on the tomb of Tu Duc here. 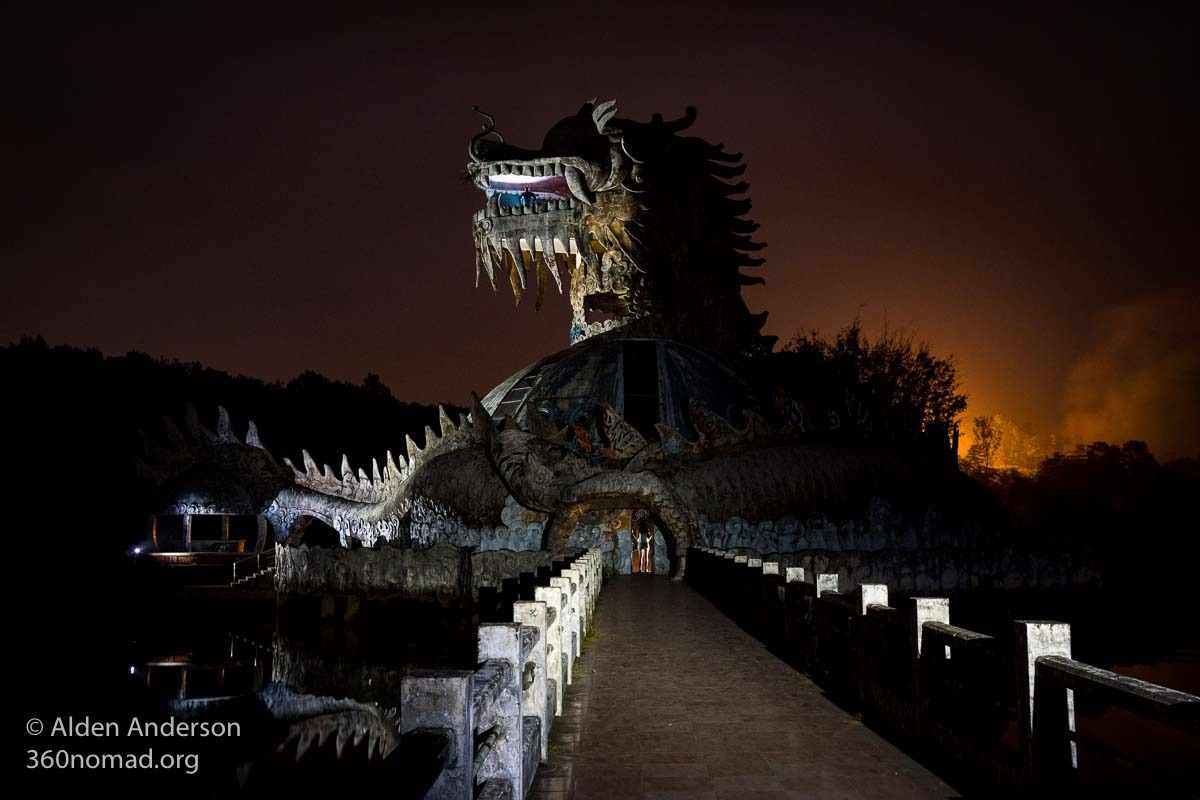 Offi­cial­ly, this derelict water park is closed and get­ting inside isn’t a sure bet, so keep this in mind when you fac­tor it into your plans.

An over­grown aban­doned water­park rem­i­nis­cent of Juras­sic Park, it is cen­tered around a giant drag­on struc­ture that you can climb up inside via a stair­case and gaze out over the park. I love old his­tor­i­cal sights (which is one of the rea­sons I love Hue) and while this park was only aban­doned in 2004, it is a pret­ty fan­tas­tic place to wan­der around in and bring out your inner urban explorer.

Get­ting there:
It’s list­ed on Google maps as Thuy Tien Lake Aban­doned Water Park, about 5 miles out­side of the city cen­ter. Some­times you can pay (10k to 20k vnd) to enter, some­times you can just dri­ve in. The last time I was there (June 2018) they were very adamant about not let­ting peo­ple in and wouldn’t accept pay­ment claim­ing that there was a fire recent­ly and it was under investigation.

With only one day in Hue you might want to plan on some­where to see the sun­set. If you’re in the Aban­doned Water Park you can watch the sun­set from the drag­on’s mouth. Oth­er­wise here are two more options. My favorite place to watch the sun­set in Hue is Tam Giang Lagoon. 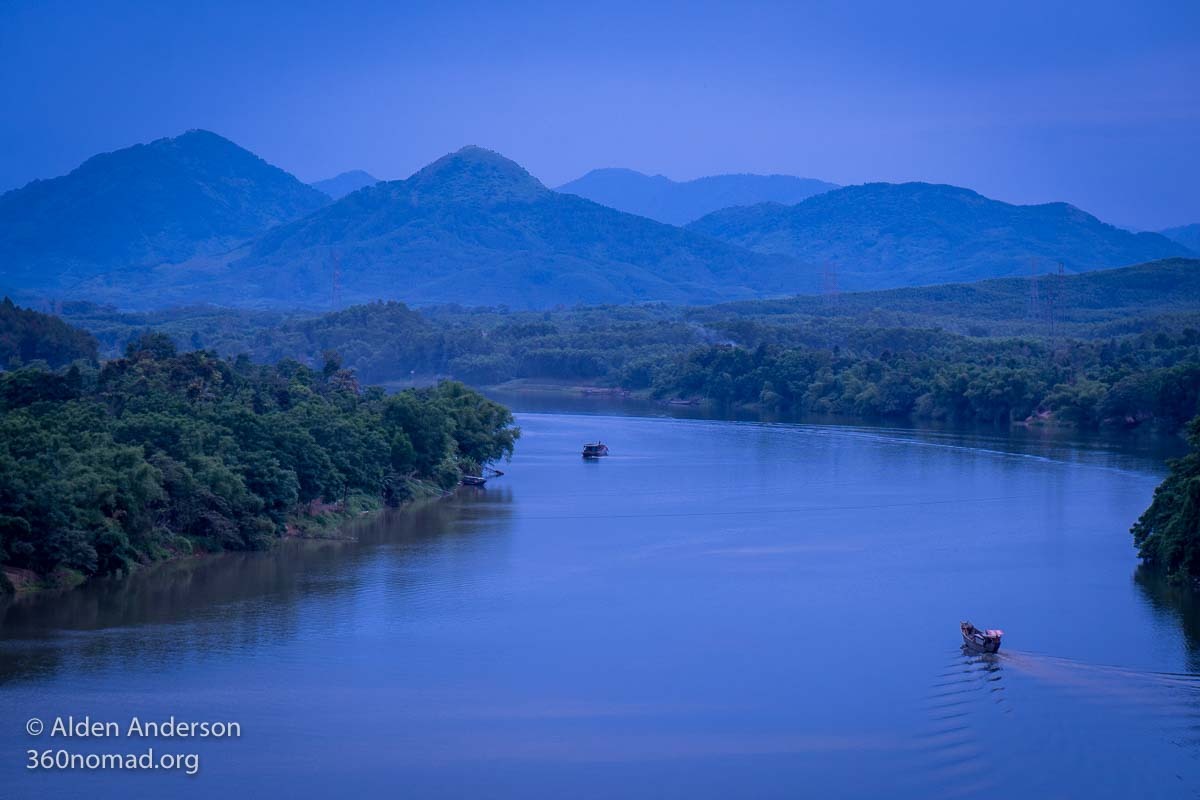 Get there:
Just down the road from the Tomb of Tu Duc up on a hill. It’s labeled as “The Hill (bunker)” on Google Maps and “Viet­nam War Bunkers” on Maps.me. 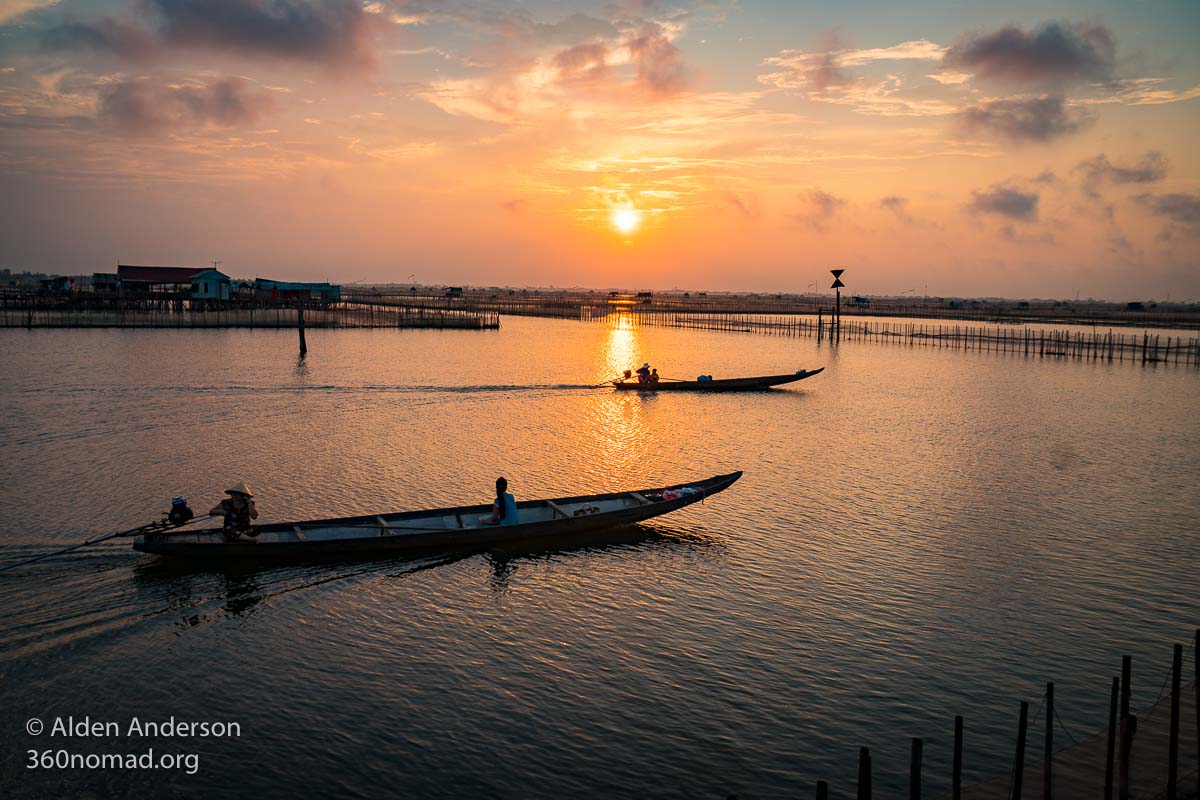 On the out­skirts of Hue, fish­er­men go about their tra­di­tion­al life on a beau­ti­ful lagoon. Come here to get away from the busier city and his­tor­i­cal sites. Take a boat out to a restau­rant (the only way to get there) propped up on stilts in the lagoon, eat seafood while the sun sinks down over the water. A per­fect relax­ing way to fin­ish a day in Hue.

Get­ting there:
It’s not the eas­i­est place to find. On Maps.me it’s labeled as “Float­ing restau­rant in the lake.” On Google Maps look for Đàm Chuồn An Phú. There are two restau­rants, both are on stilts; one you must take a boat to, the oth­er can be accessed from the shore via a wood­en path on stilts.

This is the main tourist area but many locals come here as well. Every Fri­day, Sat­ur­day and Sun­day nights, the streets are closed to traf­fic and peo­ple play games and some­times per­form live music in the street. It’s a nice place to hang out with many bars and places to eat. If you’re look­ing for some­thing qui­eter, you can walk down to the Per­fume River.

Down on the banks of the Per­fume Riv­er, clus­tered around the icon­ic Truong Tien bridge are numer­ous places to eat. Come here to get away from the more tourist vibe of the Pham Ngu Lao walk­ing street.

Walk across the Truong Tien Bridge or take a night cruise on the Per­fume River.

Getting around Hue City

To get the most out of one day in Hue, you can rent motor­bikes (if that’s some­thing you are com­fort­able with) or you can hire a dri­ver (can be arranged at your hotel). Using the Grab app also works and you won’t have to hag­gle over the price. If you do get a taxi, agree on the price beforehand.

If you have just one day in Hue and want to max­i­mize it to see as much as you can with­out wor­ry­ing about trans­port, your oth­er option is to do a tour. Most hos­tels and hotels will be able to arrange this for you. It’s less flex­i­ble and you’ll have to stick to a set sched­ule but you’ll prob­a­bly be able to fit more in than if you plan it on your own.

Among the Himalayas: Stories from Ladakh . Located

Day 8 - Postcards from Vietnam Colors of the Mark