Three Bags of Weed — A Journey to Get High in Vietnam

On a Rooftop in Saigon

“I’ve got­ten scammed a few times. But it was my fault.” “How’d you get scammed?” I ask him. He looks like he’s in his mid to late 20s, kin­da scruffy, neu­tral North Amer­i­can accent. “Buy­ing weed”.

I arrived ear­ly this morn­ing to Ho Chi Minh city and am ask­ing around at the hos­tel regard­ing com­mon scams and dan­gers to be on the look­out for. I’ve been in Chi­na and Hong Kong most of the last eight months and have got­ten a lit­tle lax on scams and pick­pock­ets. I read about the motor­cy­cle taxi rip-offs ear­li­er in the day: over­charg­ing after agree­ing on a price. Now it seems there’s a weed scam.

We’re hang­ing out on the 7th-floor rooftop of the hos­tel, watch­ing the con­stant flow of motor­cy­cles swarm­ing through the streets on a warm mug­gy after­noon. “They look like bees” I think as I watch them from high above, glad I’m not down there fran­ti­cal­ly try­ing to cross the street like a real-life ver­sion of Frogger.

“I took a day off and decid­ed to relax in my hotel room, just watch porn and drink beer.” He tells me. Some­time lat­er in the day he got bored and decid­ed to go out and look for some weed. “I was walk­ing around for a few hours but did­n’t find any­thing.” Just as he gave up and head­ed home his luck changed for the bet­ter, or so it seemed at first. “Right as I turned onto my street this guy asks me if I want weed.” 500k for the bag (about $22). But after hand­ing the 500k note over the deal­er tells him he only gave a 20k note. “The bills look almost the same, they’re both blue. The 20k is just a lit­tle small­er.” He hands the guy anoth­er 500k note, dou­ble paying. 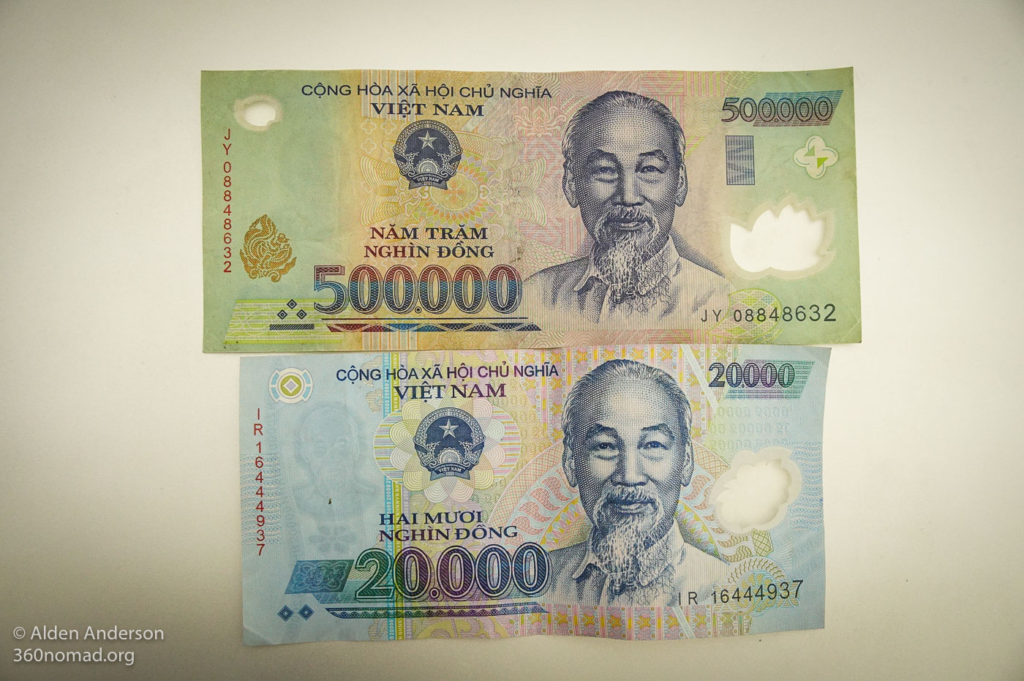 “As soon as he leaves a guy comes up to me and says “hey you just bought tea”. So I open the bag and sure enough its tea. It looks exact­ly the same but no smell.”

Deal­er #2 pulls out his own bag of weed and hands him a bud. “I break it up and smell it and its weed” he pays for the bag with a 500k note but again the guy tells him he only gave him a 20k note so he pulls out anoth­er 500k and pays him twice.

“As soon as he leaves anoth­er guy comes up to me and tells me I just bought tea. I told him no I checked it.” The prob­lem is he did­n’t check the con­tents of the bag, just the bud he was hand­ed. He opens it up and sure enough, it’s anoth­er bag of tea that looks just like weed.

Deter­mined not to be scammed again he opens up the bag deal­er #3 offers him. “I check the first bud and its weed. Then I check anoth­er and its also weed.” Con­fi­dent he’s now got the real thing he pays him. Deal­er #3 again tells him he gave him a 20k note and not a 500k note. For the third time, he dou­ble pays. “I kept think­ing I’ve been giv­ing them the wrong bills the whole time, I was­n’t real­ly pay­ing atten­tion, but when I got back home I checked my wal­let and cal­cu­lat­ed how much mon­ey I with­drew from the bank and real­ized that I was giv­ing them 500k each time.”

After get­ting back to his room he checks the 3rd bag. It’s all tea except for the first two buds he checked. $132 for three bags of tea.

"My ancestors used the sword as a weapon to defend

"This is how I usually dress at home (referring to

"I was in the army during the war, fighting in the

"I sometimes feel sad. Some people say we look lik

"At school, other kids tell me that I look like a